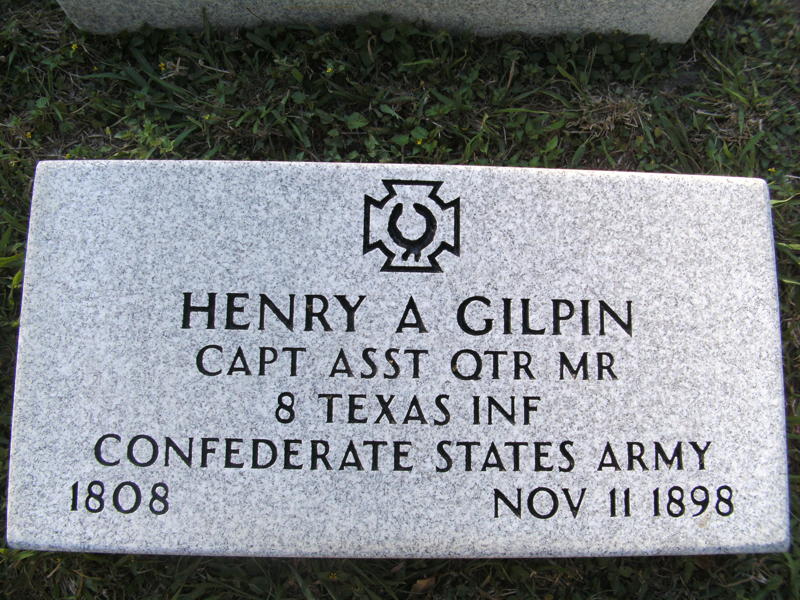 Judge H. A. Gilpin died at his home near Wade Station, Nueces county on the 11inst. Judge Gilpin has been a prominent figure in Southwest Texas for a long time and will be greatly missed.

Research by:  Msgr. Michael A. Howell

Office A. Ass't Com. of Subsistence, Corpus Christi, Texas, August 17, 1863.  Sealed proposals will be received at this office until Tuesday, the 1st day of September next, at 10 o'clock, A.M., for the supply of the Confederate troops at this place, with beef for three months.  The beef must be of good quality, and free from necks and shanks. Proposals must be sealed up, and address to the "Acting Commissary of Subsistence, at Corpus Christi Texas." Bond with good security will be required for the strict performance of the contract.

Research by:  Msgr. Michael A. Howell

The old Swift homestead on Water street was pulled down yesterday by Messrs. Reid & Sutherland, who will erect anew two-story cottage for E. T. Merriman. The old one was erected in the early days of Corpus Christi over forty years ago, and has housed many people in its time; several times it was a boarding house. A number of our people were born in it, Mr. Nelson Noakes among the number. At one time twins were recorded; several marriages and deaths took place there some of he deaths being very sad indeed. The house stood until it could stand no longer and now it is a thing of the past. During the war between the states a number of Confederates took refuge in the building hiding out from the "Yankees," who had made a raid on the town. Dr. Robertson, postmaster and druggist, ran through the block from main street and hid in the pantry, Mrs. Swift and one of her daughters placing the sideboard up against the door in such a manner that his pursuers never discovered him though they searched high and low. Mr. John Riggs, who hid under a sofa was soon found, pulled out and carried away on a vessel with other prisoners. The late Judge Gilpin had a novel and narrow escape from the Federals, which incident Mr. Julius Henry relates with a good deal of interest.

GILPIN, HENRY A., b. 1808, Newport, Rhode Island,1 d. 11 November, 18952 at his ranch on Penitas Creek.  Gilpin came to Corpus Christi Bay in a small schooner from New Orleans in the winter of 1829.  He camped on the beach a short time, then moved to Goliad in 1830.  Finding business opportunities attractive in Mexico, he moved there in 1830 and remained at Camargo until 1845.  In association with Frederick Belden, John S. Owens, and William Mann, a large-scale trading company was organized in northern Nueces County.  Very articulate in the Spanish language, Gilpin was sought as an interpreter for General Zachary Taylor, but he declined.  Gilpin served as agent for Belden, Owens and Mann at Camargo until 1848.  He and Mann became County Commissioners in 1849 when Frederick Belden was Chief Justice.  Elected Chief Justice of Nueces County in 1852,3 he was able to purchase a tract of 1,476 acres of farm land for $50 from Sheriff Thomas S. Parker.  His election in 1852 was challenged by John M. Cooper, who became Chief Justice.4 During 1852, a turbulent band of men awaited on Mustang Island an invasion of Cuba.  When the invasion scheme was thwarted by the Spanish colonial authorities, the unruly and heavily-armed force embarrassed the county.  Hundreds of cattle on the H. L. Kinney Ranch was slaughtered.  Judge Gilpin called upon the Ranger Company of Captain R. E. Sutton, and the men were encouraged to go to the Rio Grande and enlist in the Mexican Federalist Army.  Gilpin's actions were unpopular around Corpus Christi, and may account for Cooper's successful election contest.  He was again elected in 1858, and 1860 under the Confederate regime.5 He was defeated by Drury B. Glover in 1862.6

During the Civil War, he was commended by Confederate commanders,7 and he negotiated under a flag of truce with a U. S. Naval officer, J. W. Kittredge.8 He was unable to engage in politics until after Reconstruction.

Belden died in 1868, and Gilpin was named administrator of his estate.  For 8 years, he managed the estate, Carmel Ranch, and liquidated it to the immense benefit of Belden's wife, Mauricia Arocha Belden.9

Gilpin was a member of the 13th Legislature, January 14 until June 4, 1873.  His district included 22 counties from Corpus Christi to Brownsville, Laredo up to El Paso, the most extensive representative district of any state in the United States.  He retired to his ranch to devote himself to careful weather and astronomical observations.10  Described as a large man by Robert Adams,11 Gilpin remained a bachelor throughout his life.  When he died, his estate was put under administration of George Reynolds, against whom Gilpin had a large judgment.  Reynolds neglected the responsibility, and died in 1897.  N. Gussett was appointed, bonded and managed the estate in accord with the will.12

11. Robert Adams, Learning by Hard Licks, Stories from the life of Robert Adams related at the

5.  In Corpus Christi Nearly Century Ago, Indians Were Masters of the Shores of the Bay:

IN CORPUS CHRISTI NEARLY CENTURY AGO

Indians Were Masters of the Shores of the Bay

and of Movement of Taylor's Army

The history of Corpus Christi begins — someone knows when.  In the winter of 1829, when but twenty-one years of age, there landed on the west shore of Corpus Christi bay, H. A. Gilpin, the only occupant of a small schooner that sailed from New Orleans.  The brave man walked up and down the tide-kissed beach and mounted the same noble bluff that today overlooks the prettiest tidal basin on the whole gulf coast.  There was not a house to be seen nor a soul to welcome him to the haunt of the wild beasts of the forest.  He was the first to invade this section.  If others preceded him they left no trace behind them.  After remaining here a short time Mr. Gilpin went to Goliad in 1830, and from there to Mexico, returning to Corpus Christi where he found Gen. Taylor and his command.  The subject of this sketch established a business and sold goods to the soldiers in 1848 in the Belden building which was built during the time he was in Mexico.  In partnership with him were Mr. Belden, John Owens and William Mann.  General Taylor was very anxious to have Mr. Gilpin accompany his command to Mexico as interpreter.  The offer was declined and the brave Gilpin went to Camargo, remained there several months and returned to Corpus Christi the year 1848 on the calendar.  When he returned from Camargo he found Mr. John P. Kelsey.

Gen. Taylor and his command of 2,200 men had their camp strung out as far as the reef.  After a stay there of about one year the soldiers marched to Matamoros.  It was in the year 1845 when the Mexican state of Texas, which had been largely settled by Americans, and which had declared its independence some years previous, was annexed to the United States.  A dispute arose with Mexico over the boundary question, which followed which led to the war and General Taylor, in the battles of Palo Alto and Resaca de la Palma captured the city of Monterey, and marched on Buena Vista, where he defeated the Mexican general Santa Anna.  The war came to an end.

Mr. Gilpin was made chief justice here and held the office for a number of years; served three terms in the legislature being a member of that body in 1877, during the reign of Gov. Bell.  Judge Gilpin, as he is now known, was born in Newport, Rhode Island, in the year 1808, and is now in his 83rd years.  His experience hereabouts away back in the first days are quite thrilling, when white men dared not leave their homes without a rifle.  It was at the hands of the blood-thirsty reds that Mr. Berry and Col. Cook received wounds with arrows.

Judge Gilpin now resides on his ranch, Peritas, about forty miles from Corpus Christi, and is in very good health for a man of advanced years.

6.  Reference on Article in The Handbook of Texas online

9.  Excerpt from The Story of Corpus Christi, by Mary A. Sutherland

Judge Gilpin believed himself to be the first American to visit our coast.  He landed on the site of the present city I the winter of 1829, the only occupant of a small schooner that sailed from New Orleans. There was no evidence of human habitation and as the Judge did not know that the wrecked sailor, Whelan, had landed in 1824, he believed himself to be the first white man to view our bluff and two bays.  He went from here to Mexico, returning in 1848.  He became a pioneer merchant, as a garrison had been established and settlers had come during his absence. He sold goods in the Belden building, at the corner of Chaparral and Williams streets; his partners were Mr. Belden, Jake Owens and William  Mann.  No doubt they did a good business, as they had all the Rio Grande country and part of Mexico as customers.

After the Army had moved homeward a small detachment of Rangers under Captain Sutton was stationed here.  Later they were ordered to Austin. They were out but one day when trouble broke loose in Corpus village. Captain Kinney had enlisted a company of one hundred and thirty men with whose aid he intended to found a new republic on the Rio Grande.  The expedition had failed, as the Captain could not finance accouterments and supplies.  The shipload from New Orleans, which arrived, being held for cash, and returned with load to the parties who had sent her.  This disheartened the lawless men who were waiting to march and as soon as the troops were gone they organized a reign of terror.  A courier was dispatched after the Rangers, who made a forced march back, and quelled the disturbance, and another dream of conquest south of the Rio Grande failed.

Judge Gilpin later became a leading light in the Southwest, having held office of Chief Justice for a number of years, and served three terms in the Legislature, he knew all the old people, and many thrilling stories of the frontier.  The death of Captain Kinney, the wounding of Captain Berry and Captain Cook by Indian arrows.  He was captured by Mexican raiders of 1875.  Later he went into the ranching business, having purchased a place about forty miles west of Corpus Christi.  Though he lived in stirring times and had many close calls he died peacefully in his bed at an advanced age, mourned by all who knew him.  A Christian of Episcopal faith, a Mason of high standing, carrying with him to the rough frontier the rigid honesty of his youthful training.  He was a native of Newport, Rhode Island.  He sleeps in the old Military Cemetery.  With the exception of a monument raised by relatives and friends, we have never heard that our people have honored his memory by naming even a street or an alley for him.  I agree that he was our first American pioneer, as likely Mr. Whelan (no relative of the Judge of that name) was a son of Auld Erin.

Research by: Msgr. Michael A. Howell